3 years and 208 days ago, God gave us a vision that was a real game changer for Team Robinson.  So, we packed up the house and moved way out in the middle of nowhere to give our kids the great outdoors and live off the fat of the land.  Oh, to give our offspring the chance to breathe deeply the smell of fresh air and feel the sun's warm glow on their sweet faces.  Wouldn't it be wonderful to gaze upon the stars at night, unhindered by the smog and lights of the city?  Since we're going country, why don't we try our hand at farming?

We knew it would take time to adjust and that we might not be good at it at first, but we were determined to give it a go and see what happened.  We are hard-workers, not scared to put our hands to the plow or afraid to get a little dirty.  Well, three years and 208 days later, I  have determined that no matter how handsome my man looks while driving the tractor....

Two winters ago, when Dean brought the tractor around and plowed up the acre of land where my grandparents tended their garden, I had such high hopes.  Each night I nestled all snug in my bed while visions of cucumbers danced in my head.  I spent hours collecting homemade salsa recipes - in vain, it seems.  If my expectations were more realistic, I would've been more  prepared for the overwhelming disappointment I feel every time I dip my tortilla chip into commercially jarred picante sauce - mild, because we've got some newcomers 'round here that aren't quite up for the heat of hot yet.  Every time I pick up a bag of frozen peas at the Piggly Wiggly, I'm reminded of the fact that all of our crops died.  Actually, the only thing that we've managed to grow here is two stalks of corn, which by the way, grew by accident from the feed we were throwing out for the ducks.

It gets better...or worse....however you want to look at it.  Our failure in farming is not limited to just the crops.  We kill animals, too - and not like real farmers who do it on purpose.  We have learned a lot about what not to do with farm animals, that's for sure!  The first to go were the ducks.  We waited too long to put them out on the pond, and they kept waddling back up to the house.  I guess they got a hankering that fateful day for the sweet faucet water in the backyard and just didn't see Jethro coming.  Apparently, they also forgot they could fly.

The free-ranging chickens were the next species to experience casualties.  Two of them free-ranged a bit too far from home and couldn't outrun the dog next door.  Poor gals.  And then there was Brownie, poor Brownie the goldfish thief.  She just wouldn't stay out of our vehicles and eventually ran out of lives.  We had a funeral one Sunday afternoon for that hungry girl, which is crazy by the way.  The whole time I'm thinking, "What are we doing?  It's a chicken.  Aren't we going to eat the chickens anyway?"  Maybe we didn't explain this whole farming thing to the kids correctly?

If I may give you a word of advice here:  If there is a food shortage, and you get it in your mind to head toward our house for help, you'll get here and be hungry with the rest of us, folks.  You might want to revamp your backup plan.

Now that my sob sorry is all out there, I'm finished feeling sorry for Team Robinson.  It's time to look toward tomorrow.  God isn't finished with us yet.   All of this failure is for a purpose, and we trust Him.   Inspired anew and enamored with He who cast the vision, we're ready to try, try again.  We're no quitters!  We gave our little fieldhands a pep talk, cut down some pine trees that had grown up in the garden and got the tiller back out.  We're planting corn- on purpose this time - along with beans, squash, onions and pumpkins, for our fall garden.  I have a feeling it's going to take off and grow like never before.

After we get the seeds in the ground, the chickens are getting a new pen, and we're firing up the incubator for some new little chicks, maybe even some new ducks. No more free-ranging birds, but they'll have plenty of space to roam in their colossal pen.   Fencing is also going up for the herd of goats we're buying.  Yes, it's a herd.  Some people get a goat or two, but not us.  We go for the whole herd.  Go big or go home.  That's what they say, right?  (Please, Lord, bless our hands at goat keeping that the goats may live long, happy lives.)

It's going to be a busy week between all the working, farming and schooling that has to get done.  Dean says farming is a lifestyle and we'll get the hang of it.  Okie dokie, then.  I guess we'll see now, won't we?

We've spent a lot of time at home (or close to home) this summer "finding our new normal." So far we've not found it yet.  Ha!  It's being elusive! Some days are easier than others, but every day I'm humbled and thankful for the honor and privilege of loving the precious children God has given us.

I've struggled a bit with my attitude toward all of this rain!  There are 12 children under my roof, and when it rains all day, every day, I get a little stir crazy.  In between torrential rain and daily heavy lightening, we've walked every square inch of this property, enjoyed thousands of blackberries and tracked buckets of dirt into the house. The best thing about the weather is that the rain turned the main road to the backside of the property into a river.  We, of course, couldn't keep the kids out of it.  They have played for hours on end in Rio Robinson. 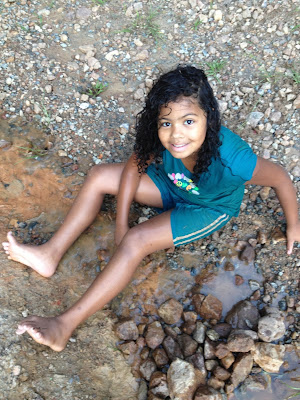 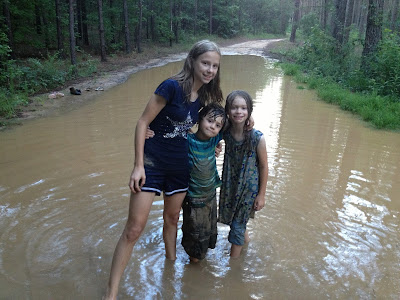 As the river slowed, turned to puddles and then eventually dried up, Riley discovered a "family" of tadpoles flipping and flopping around in the mud. A rescue mission was quickly executed and the soon-to-be frogs are safely swimming around in the pond where the catfish might or might not snack on them.  Do catfish eat tadpoles? 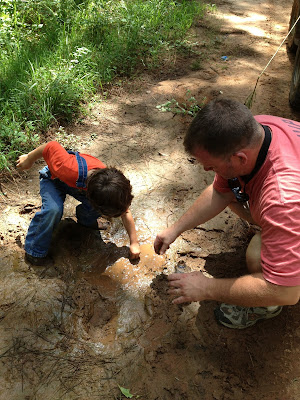 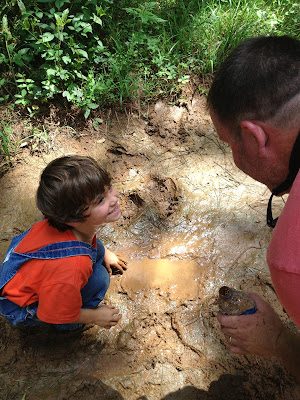 Around about the middle of June, the words "I'm bored" began to echo through the house, so I agreed to allow a little fun-boosting project.  As a result, in true superhero fashion, I saved countless teens from certain peril by halting the construction of an epic slip-n-slide designed by one Blake Robinson.  Before any of you way cool moms, dads and teens calls me a party pooper, please know that somebody would've certainly broken something if I hadn't stepped in....and that somebody would've probably been Dean. 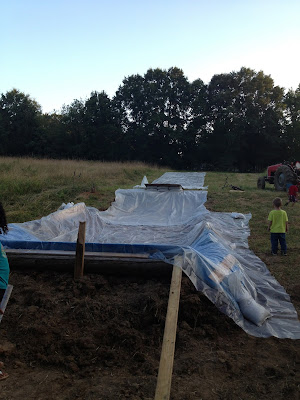 The way less epic slip-n-slide was still a lot of fun and has provided quite the entertainment around here. 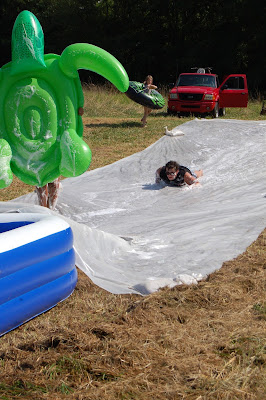 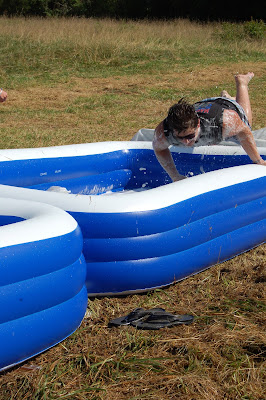 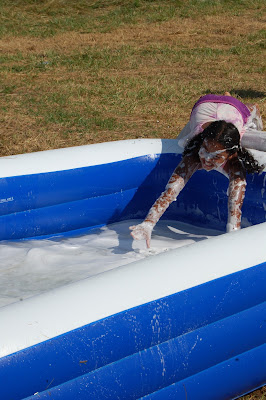 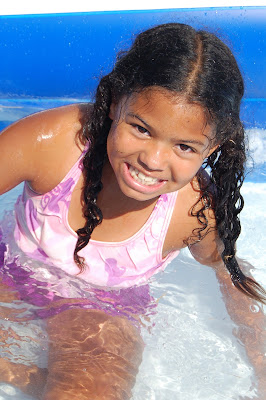 Boredom threatened again around mid-July, but then I got this hare-brained idea (from my dear friend Stephanie) to take the kids out to eat some free food.  I almost bailed at the last minute, overwhelmed by the need for 13 head-to-toe cow costumes.  The tween girls sensed my weakness and wavering, though, and quickly sprung into action.  They jump on any opportunity to head to town!  A few hours later, we were all clad in black and white, with masks and tails in hand, and piled in the car for the 45 minute drive into town.  I'm so thankful we did, too.  We had a great time and dinner was delicious (and free to boot).  There was even a bonus:  Team Robinson won the best dressed herd contest at Chick-fil-a's Cow Appreciation Day!!  Thank you Chick-fil-a!! 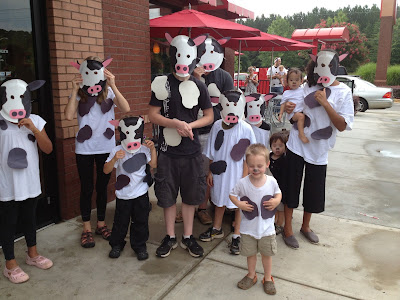 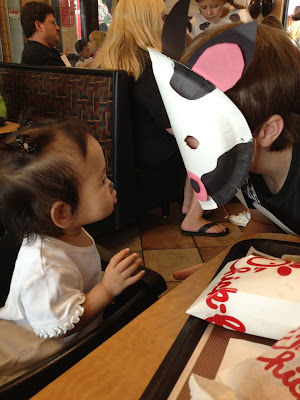 No summer is complete without a little heart-pounding adventure, right?  Nothing gets my heart pounding like creepy critters!  I've tried to keep an open mind about snakes, and I've even been nice to at least one.  I took a picture to demonstrate the fair treatment this little specimen received during a summertime science lesson with cousins. 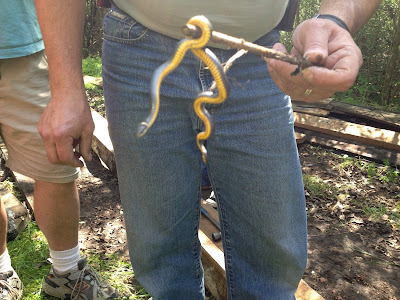 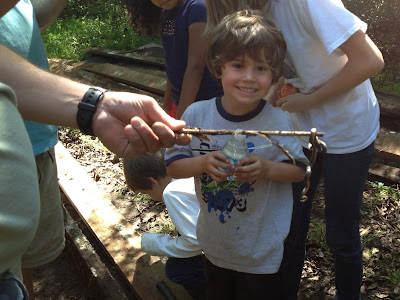 Rattlesnakes, however, get another treatment altogether.  This little guy was spotted by my sweet Olivia who happened to look down while we were all trying to find the source of the odd buzzing we could hear.
I was certain I would find a hornet's nest hanging high above our heads.  (Heads up, folks - I'm probably not the best person to approach with your outdoorsy, hey-what's-that, questions.)  I'm so thankful Olivia spotted the snake before he struck her.  I know all might not agree with the swift justice applied, but I have a solid "no rattlesnake" rule in the backyard and violators will be dealt with swiftly.  Thank you, Blake! 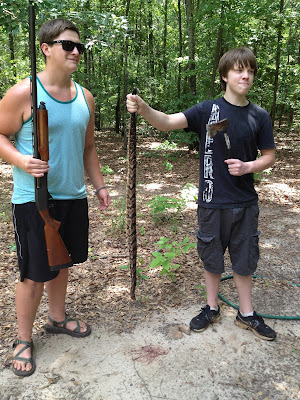 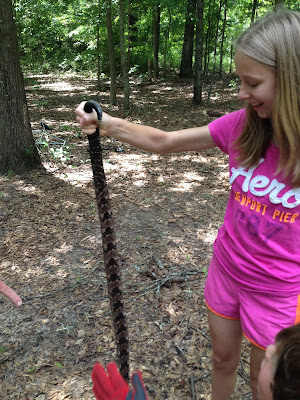 Then promptly scared the bejabbers out of everyone by hollering and wiggling the gross thing at me.  Of course, I screamed and about wet my pants.  She's unrepentant. 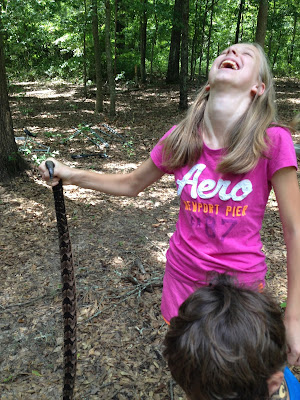 We've got a little more fun to pack in before Fall pokes its head into this corner of the world.  Hopefully, we'll make it all the way to first frost without any more snake adventures!
at 12:04 AM No comments: