High on a hill is a lonely goatherd

All the blogs about being a goatherd make it sound so grand.  That's not really true.  They don't really make it sound grand, but I really did think it would be grand anyway.  My rock star farming friend, Laurel, makes it seem pretty grand.  Maybe she's putting something in my tea when she welcomes me to her table for an afternoon chat. Hmmmm.....

About a month ago we took this little farm of ours up a notch.  We had to if we wanted to call ourselves farmers.  The crops died again.  The pep talk we gave ourselves during planting just wasn't enough. So we're not good with things that grow up from the ground.  That's okay.  Maybe we're just supposed to raise livestock.  I'm proud to say that we've kept all the chickens, and now the ducks, alive for quite some time.

So we got some livestock. (I love how if you look close you can see the tiller parked next to a garden bed  in the backyard. Ha!  Makes me laugh every time I look at this picture.)


Meet the livestock!  This is Brutus and his ladies. 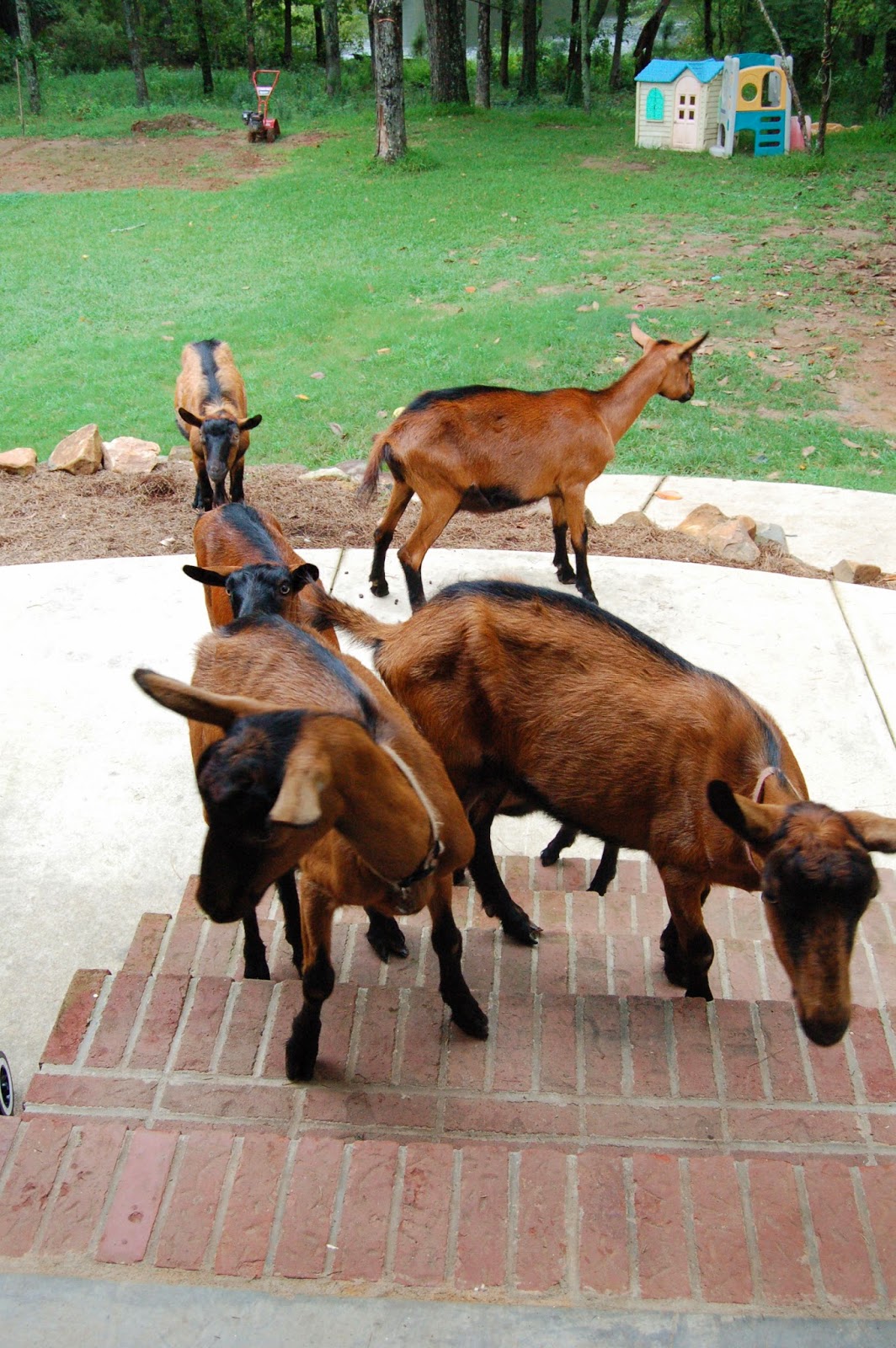 They're beautiful Oberhasli dairy goats, and they joined Team Robinson in early August.  They are the reason that I haven't blogged in forever - they and the 12 kids that now live here. Holy Goatherd, Batman!  Dairy goats are a lot of work!!

Notice in the photo above that the goats are on the back steps, trotting up to the porch like they're part of the family.  Well, we've been having a little fencing problem, which apparently isn't uncommon for farmers raising livestock of the goat variety.  We would know this if we weren't city folk.  We're learning.  We are learning. And we're fencing.  Every.Single.Day.We.Are.Fencing. 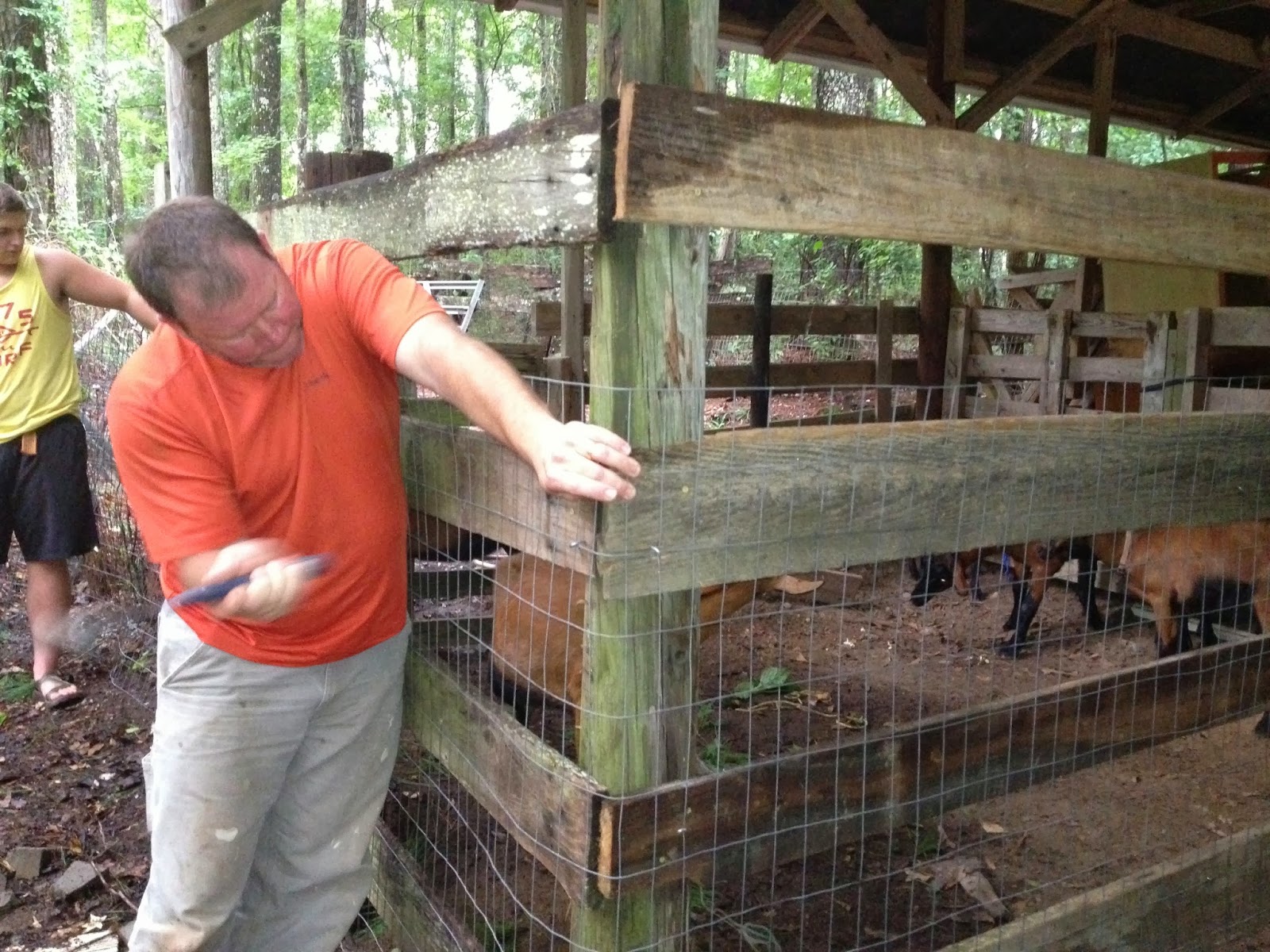 In addition to the challenges of fencing, being a goatherd can be lonely, too, especially when the family fails to get as excited about caring for livestock as they should.  When that happens, I take to yodeling on social media to a) heckle Dean publicly, and b) entertain myself and....let's see....4 other people with witty quips using lines from my favorite musical. No other musical has both goats and lots of kids! 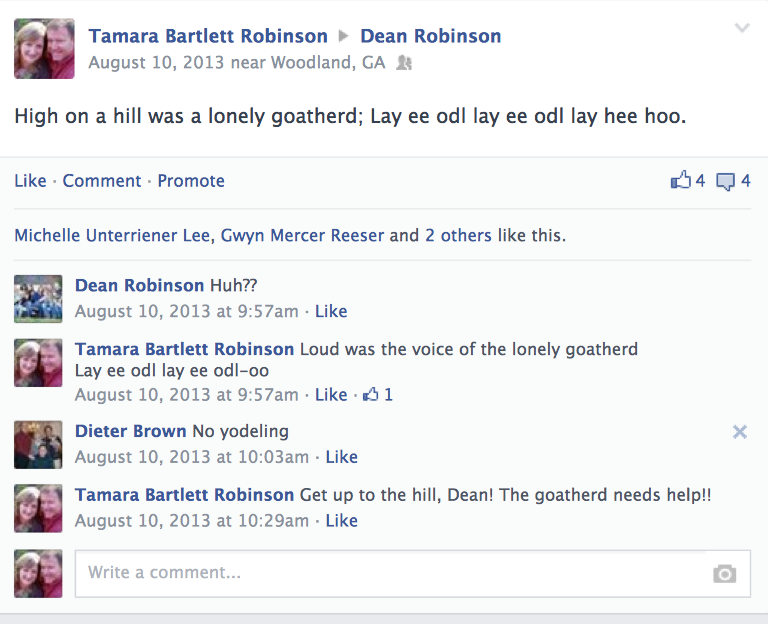 Looking beyond the joys of fencing, we are discovering that milking isn't all that grand, and you can't skip it if you just don't feel like doing it that day. In the beginning I was so eager, excited even, to add milking to my daily routine.  I was so excited I even let someone take my picture looking seriously not fancy and milking into a feed bucket. Yep, we're that good at this milking business! 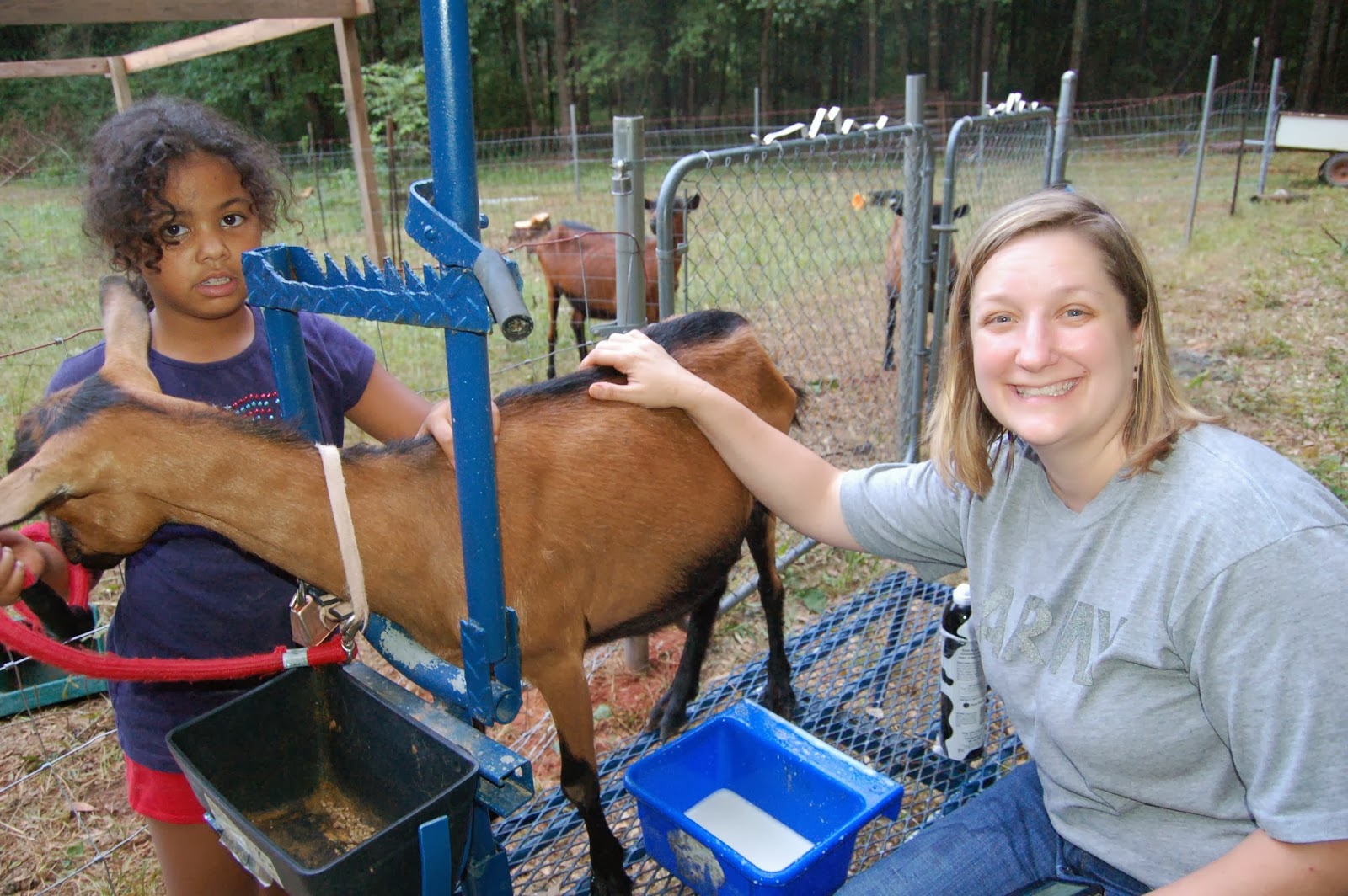 Now, a couple of weeks later, we've come a long way with this milking thing.  We've got the proper setup and we're not milking into a feed bucket any longer.  We've also learned that milking is not very exciting.  Morning and night, there's milking to be done. I will say God's using milking to do a work in me.  It's hard to keep on being fancy when you're milking goats. I've stooped to letting people take pictures of me in camo pajama pants now.  Not so fancy! The coffee keeps me sane and the cell phone lets me complain about my situation to anyone who will read my texts from the pasture. 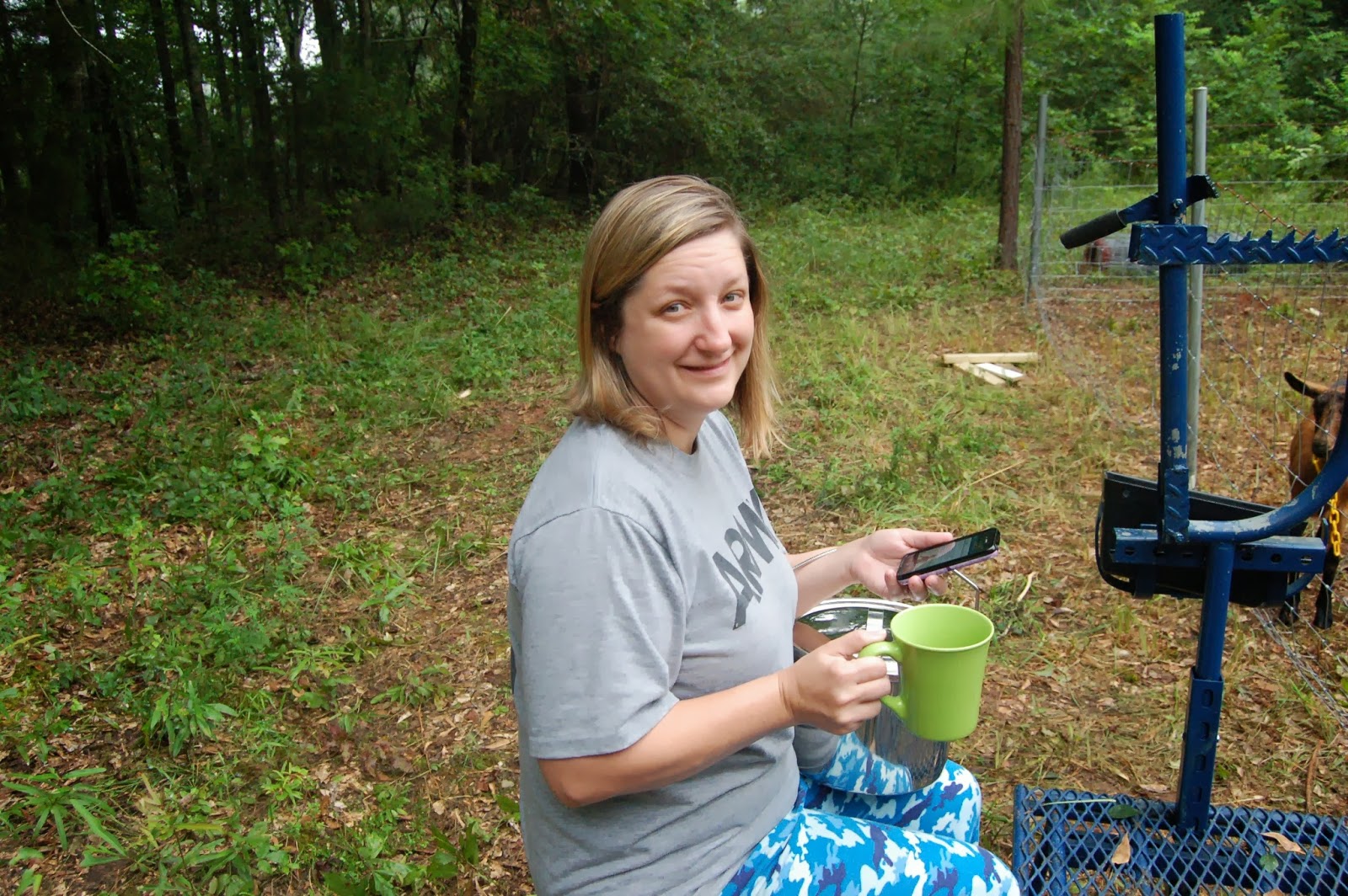 I mustn't ignore the pluses of being a goatherd.  Goat's milk everyday - SCORE!  Cheese - WIN!  Friendships that are deep and abiding - MORE PRECIOUS THAN GOLD!  I'm beyond thankful to my dear Laurel who keeps me in the know about everything between the hooves and the horns and from the milking stand to the table.

I went to visit a sweet friend today and came home with a gift of five ducks.  My friend Laurel is a REAL farmer, meaning she plants crops AND harvests them.  She's the real deal.  I'm fascinated by that.

Just a few weeks ago I wrote with renewed passion about how we weren't giving up and the crops were again going in the ground.  The seeds did go in the ground, so only time will tell.

No worries, though, the Piggly Wiggly still has frozen peas and Laurel believes in our farming potential - believes enough to entrust us with 5 ducks, which says a lot considering how the last duck raising attempt turned out!

I wasn't expecting such an amazing gift when I arrived at Laurel's house, so I was unprepared to transport them home.  Laurel offered that I carry the ducks home in a rabbit cage, and her son set about rounding up sweet things.  Within a mile of her house, I was hanging my head out the window of the van.  How on earth do 5 ducks make the likes of that smell in the span of time it takes to drive a mile?  I didn't think we'd make it home.

When we arrived home, I drove right past the house and straight down to the pond.  My head was already hanging out the window, so I hollered for the kids that I had a surprise and to meet me down at the pond.  They were indeed surprised!  As they slid the van door opened, the overwhelming smell knocked a few of them off of their feet! 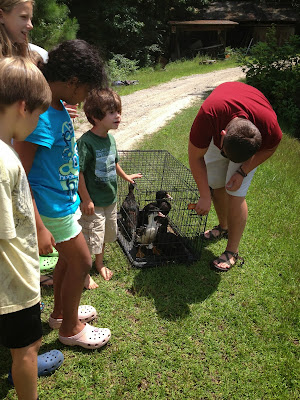 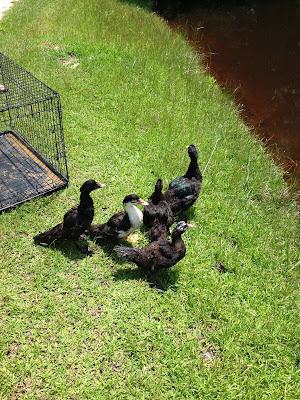 The foundations of a beautiful relationship were formed today on the banks of our little pond.  It happened so fast, and I was too busy snapping photos to remember to tell them about how these ducks are raised for meat. A real farmer would've already established this with the farmer children before bringing home edible farm additions.  Oops! 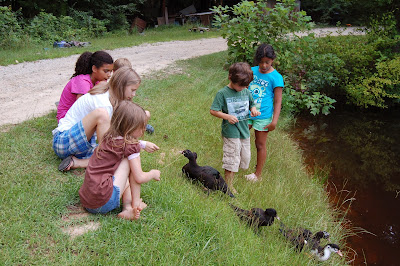 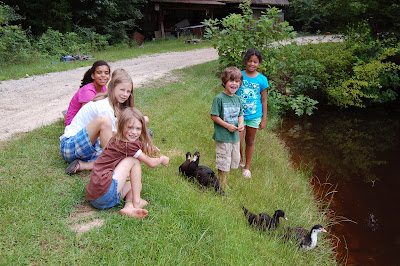 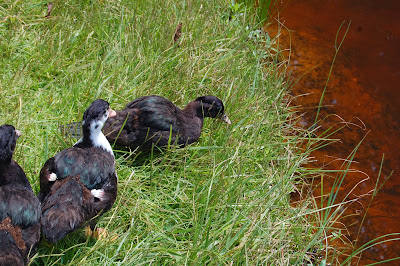 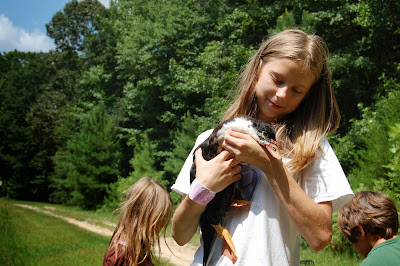 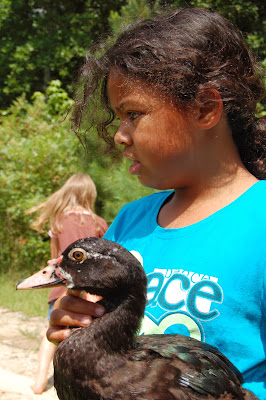 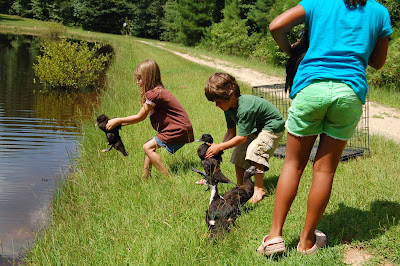 The kids played and named and showed the ducks the water.  They were surprised when the ducks wanted nothing to do with the water and spent more than an hour trying to convince the ducks that they would love the experience of swimming out onto our pond. I am not surprised that these ducks don't seem to like water.  That's just the way the farming goes around here.